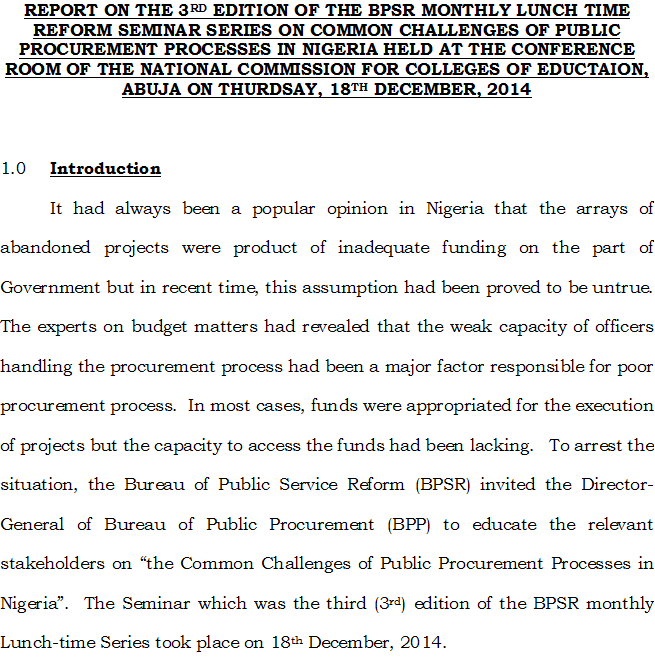 REPORT ON THE 3RD EDITION OF THE BPSR MONTHLY LUNCH TIME REFORM SEMINAR SERIES ON COMMON CHALLENGES OF PUBLIC PROCUREMENT PROCESSES IN NIGERIA HELD AT THE CONFERENCE ROOM OF THE NATIONAL COMMISSION FOR COLLEGES OF EDUCTAION, ABUJA ON THURDSAY, 18TH DECEMBER, 2014
DOWNLOAD HERE

In its effort to address the challenges of growth and development in Nigeria, especially the infrastructure shortages, high rates of unemployment and poverty, widening disparity in income and rising recurrent expenditure, the Administration at the outset, in May, 2011,developed the Transformation Agenda (TA) (2011 – 2015).

The TA demonstrates our desire and capacity, to transform our thinking institutional organization and human capital to support the aspirations of the Nigerian people, through is a blueprint on key policies, programmes and projects to be implemented during 2011 – 2015.

WHITE PAPER ON THE REPORT OF THE PRESIDENTIAL COMMITTEE ON RESTRUCTURING & RATIONALIZATION OF FEDERAL GOVERNMENT PARASTATALS, COMMISSIONS & AGENCIES

The Federal government runs its business through the efficient and effective operations of the Public Service. In 1970, the Federal Government expanded the scope of the operations of the Public Service from core policy implementation to active participation in all sectors of the economy through the establishment of Agencies, Parastatals, and Commissions.

The additional Bodies were to be the drivers of the socio-economic objectives of the Federal Government. Some of them were set up on ad hoc basis to address specific challenges.

2. Over the years, the Bodies transmuted into permanent institutions with overlapping functions in some cases, and successive Administrations had further created more Bodies without regard to their efficacy in the attainment of the socio-economic Agenda of the Federal Government leading to escalation in cost of governance.

3. To redress this situation, His Excellency, the President and Commande...

Air transportation plays a vital role in the global economy. This mode of transport provides the fastest and safest means of movement of goods and services across the world. For instance in 2011, over 2.8 billion people travelled by air in more than 26 million flights worldwide.

The global turnover in the industry is more than US$1 trillion.

Reforms in the Transport Sector

Dear Readers, the efforts of the Honourable Minister of Transport Senator Idris A. Umar in implementing the Transformation Agenda of the Transport sector of the economy has not passed unnoticed. Significant and fundamental improvements that touch the lives of Nigerians have been put in place.

In the Reform sector, the President Dr. Goodluck Ebele Jonathan has appointed Dr. Joe Abah as Director- General for the Bureau of Public Service Reforms. This implies that there will be focussed and uninterrupted leadership driving the Reforms for the next four to eight years.

As part of efforts to revitilise and restructure the Public Service Reforms the President has furthermore approved the resuscitation of a twenty four member Steering Committee with the Secretary to the Government of the Federation, Senator Anyim Pius Anyim as Chairman. Also in this edition you will find reminiscences, essay on Public Service Reforms, villa diary and news from MDAs. Please relish this presentation.Editor-i

BPSR was established by Presidential directive in 2003 and was meant to be staffed by a mixture of technical experts and civil servants. As it was not set up by law, it has not been possible to recruit its own staff and attract the calibre of people it needs to effectively discharge its functions.